It is a special day for Agastyamatah Charitable Trust [AMCT] team to get together for a special programme ‘Nadi Vigyan Re –Orientation & Documentation Programme’ based on pulse analysis and diagnosis.

AMCT team marks this programme with the opening by Vd. Umang Pandya [ Principal-Global Ayurveda College & National Secretory of Agastyamathah Charitable Trust]. He is practicing Ayurveda magnificently since many years gave a warm and hearty welcome speech , brief introduction about AMCT and its upcoming 9 initiatives [9 Prakalpam], so called nine gemstones of AMCT, ‘NAVRATNA of AMCT’. He explained about how these nine gemstones of AMCT are going to work for betterment of society. Vd. Umang Pandya great words of introductory speech was followed by brain storming words of our honorable chief guest Dr. C. M. Vaghani Sir [Principal of O. H. Nazar Ayurved College, Surat & Senate member of Gujarat Ayurved University].

Sri Dr. C. M. Vaghani has taught about thousands of students as Ayurvedacharyas under his well proficient guidance in Surat. He gave a big ‘Thank you’ to all Ayurveda students and Ayurvedacharyas for their efforts towards learning of Paramparik Nadi Vidya, as Ayurveda is heading towards its eternal path since ages, so it is important to learn this very important and microscopic disease detecting and diagnosis, as Nadi Vidya is being subtler in nature. He expressed his thanks towards all Ayurvedacharyas who are practicing Nadi Vigyan and also to new learners of Nadi Vidya for their active participation in programme and making it very much interesting.

The programme on Nadi Vidya was initiated on 19 sep., 2019 which was very well introduced, planned, managed and successfully documented by the AMCT. The AMCT and its team has made its two very important announcements of this year, firstly the ‘Nadi Vigyan Re-orientation & Documentation Programme’ based on PULSE ANALYSIS and DIAGNOSIS and secondly ‘New Basic Nadi Parikshan Course’.

Every workshop starts and ends with announcement so here is a beautiful collection of such two for interested Nadi Vigyan learners and scholars. Stating about the AMCT First announcement i.e. ‘Nadi Vigyan Re-orientation & Documentation Programme’ based on PULSE ANALYSIS and DIAGNOSIS. Under this programme only the previous learned and Nadi Practicing Ayurvedacharyas and students who had learned this ancient art of traditional Nadi Vidya from great Nadi Guruji Sivanandan Vaidyar, get together for the Nadi reading documentation on various diseases. And secondly ‘New Basic Nadi Parikshan Course’-PULSE DIAGNOSIS WORKSHOP in Surat, Gujarat for 6 months is going to be started in next month. In this PULSE DIAGNOSIS WORKSHOP, only the interested students will be selected and only then they will go for further stages of pure teachings of Ancient Nadi Vigyan depending on their deep hidden skills within them. 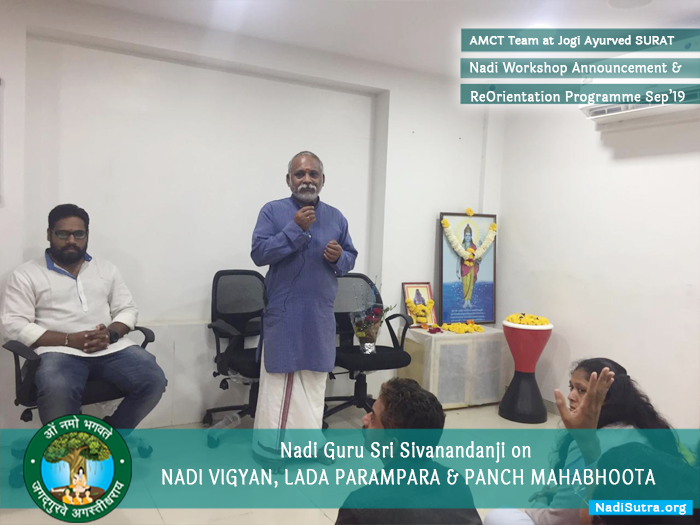 People gift their dear ones a tight hug, a beautiful flower, a pretty thank you card to express their sincere love and for admiration of their support or hard work they have done to help others and feel happy in their lives. The AMCT also thank Dr. Devangiben Jogal for her efforts  towards such a wonderful work. The AMCT mention its deep sense of appreciation for the ‘Nadi Vigyan Re-orientation & Documentation Programme’ based on PULSE ANALYSIS and DIAGNOSIS and  also 6 months ‘New  Basic Nadi Parikshan Course’ in Surat and also for her  support thank you very much for such an interesting programme.

AMCT considers her work of initiation, direction and leading the programme, as a token of appreciation for  giving her  precious time and also her valuable contribution thereby making it best programme in Surat, Gujarat. AMCT repeatedly discovers that it is a thankless task by Jogi Ayurvedic Hospital-Surat, Gujarat.

Nadi Vigyan is a Vidya by which disease can be correctly diagnosed and treated in effective manner so that patients may get benefit from proper and correct Ayurvedic Treatment.Nadi Vigyan is a Indian medicinal method by which whole system of medicinal knowledge is being passed from guru to his disciples from generations to generations for treatment and cure of diseases and making society disease-free. Therefore, it is important that Nadi Vigyan should be learned from a well-trained Nadi guru.

The importance of Nadi Vigyan was very well reflected in the speech of our Nadi Guruji Sri Sivanandan Vaidyar Guruji. He stated that through complete knowledge of Nadi vigyan all Ayurvedacharyas can  well serve society by the means of Paramparik Ayurved Chikitsa Paddhati and also how they can practice Paramparik Nadi Chikitsa.Nadi Guruji Sri Sivanandan Vaidyar guruji  mentioned that till now Nadi Vigyan technique is being used for proper diagnosis of diseases but if  correct knowledge of Paramparik Nadi Vidya is being instilled in minds all working Ayurvedacharyas then that day will surely come in near future when Ayurveda treatment  will reach its peak in the field of medicine.

Nadi parikshan Vigyan is like a big ship in a huge sea of medicine field of Nadi Vigyan. To learn proper Nadi Vigyan all interested Ayurved scholars and learners must develop spiritual practices, adequate health and deep still concentration within their minds and hearts. Only day to day grinding practice of Nadi readings in patients, will develop a deep and accurate knowledge of Nadi Vigyan. Then only one Ayurveda practioner can move towards right diagnosis of diseases.

Sri Sivanandan Vaidyar Guruji, on behalf of AMCT, and special guests call it fraternity of Nadi Vigyan  here together with Jogi Ayurved Hospital extend a very hearty  thanks to all speakers for gracing important work of Nadi Vidya and sharing with us their findings and opinions.

He also stated that  along with 6 months ‘New Basic Nadi Parikshan Course’ in Surat and Nadi Vigyan Re-Orientation & Documentation Programme’ a new work of  re-orientation and documentation of Nadi  readings  by collection of Nadi readings of previous Nadi learned Ayurvedacharyas in the upcoming years. Only limited selected students will get enrolled in 6 months ‘New Basic Nadi Parikshan Course’ workshop in Surat. This Nadi Parikshan workshop is about to begin in next coming month of this year i.e. October.

The AMCT would like to acknowledge our gratitude to Jogi Ayurved Hospital for exposing the theory of Nadi Vigyan. We have been fortunate enough to be backed by a team of Jogi Ayurved Hospital, which was very motivating and its dedicated colleagues who know their job and are result oriented. We are all inspired by your great work and words. 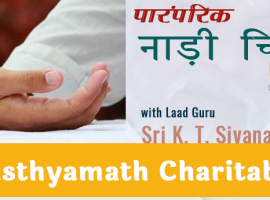 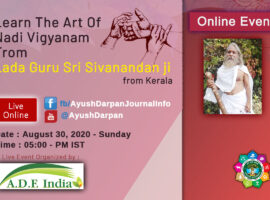 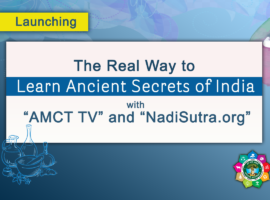