In ancient time, Lord Shiva and Lordess Parvati were Wandering In The Forest disguised as Tribal People. During that time Lord Shiva advised 96 Sutras To Goddess Parvati. In each & every sutra, there are 64 Quotations. Also, each & every Quotations Have 64 Experiments (Prayogas). This is defined as Lada Vidya. So, the total numbers of Experiments are 393216 & Padal are 262144. Godess Parvati advised this knowledge to her son Lord Kartikeya. Then after Lord Kartikeya advised to Saint Agasthya. Saint agasthya Gave It To His 18 Disciples. Among them Matsyey Muni learnt Lokvedam (Particular Chapter) & all the details of Sutras. After learning this Lada Vidya, Matsyey Muni was also known as Terayyar,’ a Well Known Physician’. Terayyar Saint was living with King Vikramaditya In Ujjain Region up to 2000 years. During this period, King Vikramaditya and Saint Terayyar (Virat Vaidya) Lived 6 Months in Capital and another 6 Months in forest. Thereafter He did Intense Tapas in Subramanyam Temple of Sindur Village Of Andhra Pradesh. Following that he started his own Parampara, Known As ‘Lada Parampara’.

This Parampara Whole Science is described In the form of Chatur Deeksha one of his disciple Siddhartha (Siddhayyar), did tapas towards Lord Narsimha in a temple near Visakhapatnam, Andhra Pradesh. Siddhayyar gave Chatur Deeksha to his son named Gopalguru, who was born in 1865. Siddha Gopalguru Travelled Across India For 32 Times To Observe Countrywide Situation. He lived in kerala state for 36 years. He was known as Vadi (Dandam – a Stick) Vydian . This Dandam consists of 64 Cells For Storing The Precious 32 Sindurams and 32 Bhasmas.

He Had Three Disciples.

Her (Poojaniya Guru Ulagi Thiruma) husband Ulaganmoopan was also a Siddha Vaidya. He Died In 1980. This Couple Lived In Kuttathatti Village near Sabarimala with their 12 children. among them, Thankkapan was the 11th one. Thankkapan was sent to serve Lord Kartikeya Temple in Palani, Tamilnadu In 1930 as a celibate. He travelled across India with Guru Gopalaguru. In 1960, He married & settled In Idukki District, Kerala. Shri K.T. Sivanandan was born In 1966 In Mundi Eruma Village, Kerala. Thankkapan is his father as well as his Guru. Shri  Sivanandan ji learned secrets & details of traditional Nadi Vigyan from Lada Parampara from his grandmother Guru Ulagi Thiruma. 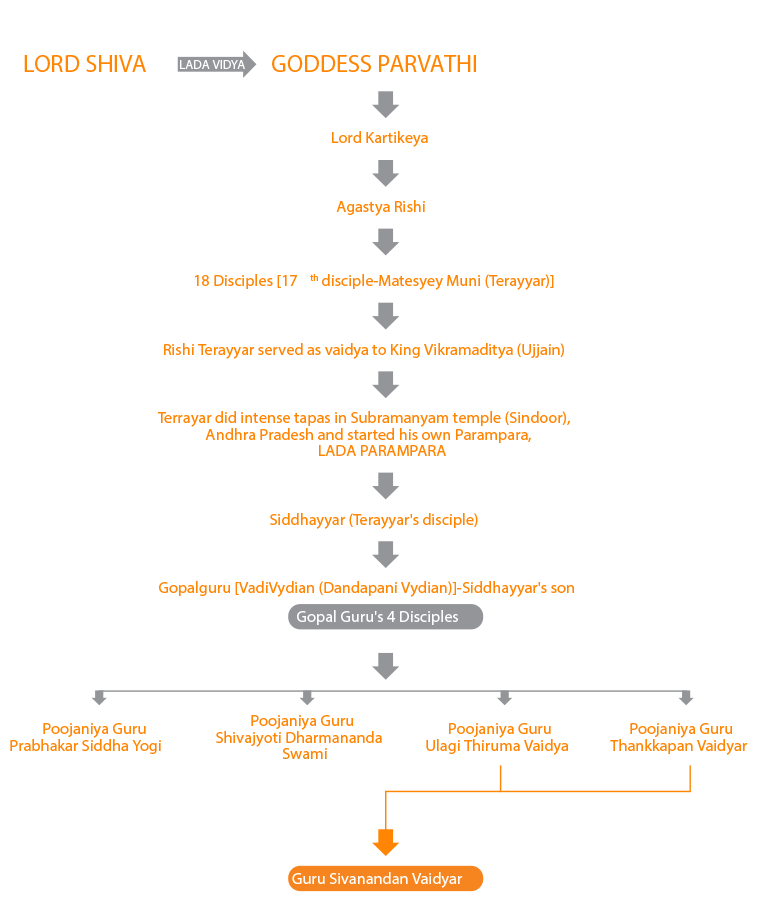 A person who is fully absorbed in Krishna consciousness is sure to attain the spiritual kingdom because of his full contribution to spiritual activities, in which the consummation is absolute and that which is offered is of the same spiritual nature.
[Bhagavad Gita Chapter 4 Verse 24]